Between Johannesburg and Port Elizabeth we spent a few days exploring the great Drakensburg Escarpment that cleaves its way way along the eastern cape and forms the border of South Africa and Lesotho.

It was a purely scientific endeavor; Sarah the biologist looked for creatures, Grant acted as guide and Mars provided medical support while I documented the expedition.  We sped across the flat Free State province – named for the independent Boer sovereign republic in the 19th century- and made our way to a game park near Harrismith.  From there we stocked up on the essentials (biltong, wine and biscuits) and headed south into KwaZulu-Natal. The district was dotted with dusty little towns not all that different in appearance from some remote parts of Australia but far more lively.

Everywhere we went we saw lean men and women in colorful clothing walking alongside the road or waiting for the ubiquitous ‘kombis’ that fly up and down the highways.  The minibuses are the mainstay of public transport outside the cities- they might have started out as VW Kombiwagons but nowadays they’re pretty much all 16-seater Toyota HiAce buses. Once we turned off the main road towards the mountain range the towns thinned out and we started to encounter the more traditional circular homes made of mudbrick and thatch.  The people in the foothills weren’t waiting for any buses.  They hiked along the roads carrying baskets and oversized bundles of sticks.  Every now and then we’d catch site of a women who had sun-screened her face with white clay.

Before long we were in a virtually empty campsite in the uKhahlamba-Drakensberg Park right at the base of the escarpment.  Close to where we’d set up camp we found a number of neat, freshly excavated burrows just large enough to fit your hand into.  After we had unfolded the rooftop tent Sarah spent most of the remaining light on hands and knees peering down into the little tunnels. Being a glass-half-full sort of girl, Sarah was convinced that if we waited long enough or probed the tunnels with a long enough stick we could get a critter to pop its head out from an adjacent hole. Me, being a glass-half-empty sort of guy, figured that the creatures were well and truly dormant- having retreated deep within a tunnel network comparable to the Tokyo metro.  We watched the sunset light up the peak in orange and red and turned in early.

The next day we hiked around Cathedral peak- circling back after getting a good look at the summit- just over 3000 meters above sea level.  It was still and quiet on the slopes and we had the mountain all to ourselves.  After packing up at Cathedral Peak we headed further east along the escarpment through a haze of smoke from controlled burns in the valley to a new campsite in the shadow of a mountain known as Monk’s Cowl. When we arrived at one campsite we could see a line of bright yellow firefighters winding their way through the scorched grassland.

On our first little hike into the valley we found our way into a dense patch of bush. It was dark and we were quiet but we must have disturbed some wildlife. Before long there were baboons calling to one another (to us?) from the cliffs above us. We were thrilled to catch a glimpse of them far up the slope. An hour later that initial thrill had already evaporated as we fended off baboons attempting to raid our food supply.

The haze in the valley didn’t make for great landscape panoramas but it did lend a moody atmosphere to the climb up the escarpment the next day. For a long stretch the walking track followed a contour line that had also served as the firebreak for the burn so the down-slope was black and the uphill side was green. The track took us through grassy hillsides beneath giant limestone cliffs. Unlike those in the campgrounds the baboons in the mountains kept their distance.  At one stage I came across the remains of a baby baboon- it was strange to see a skull that looked so small and human.  At the highest points in the climb you could begin to feel the thin air but the weather was fine even if the creeks in the gullys were frozen over.

After a long day on our feet we had dinner at one of the up-market resort restaurants in the park and planned our next trip into the range- the winding road to Lesotho via Sani Pass. 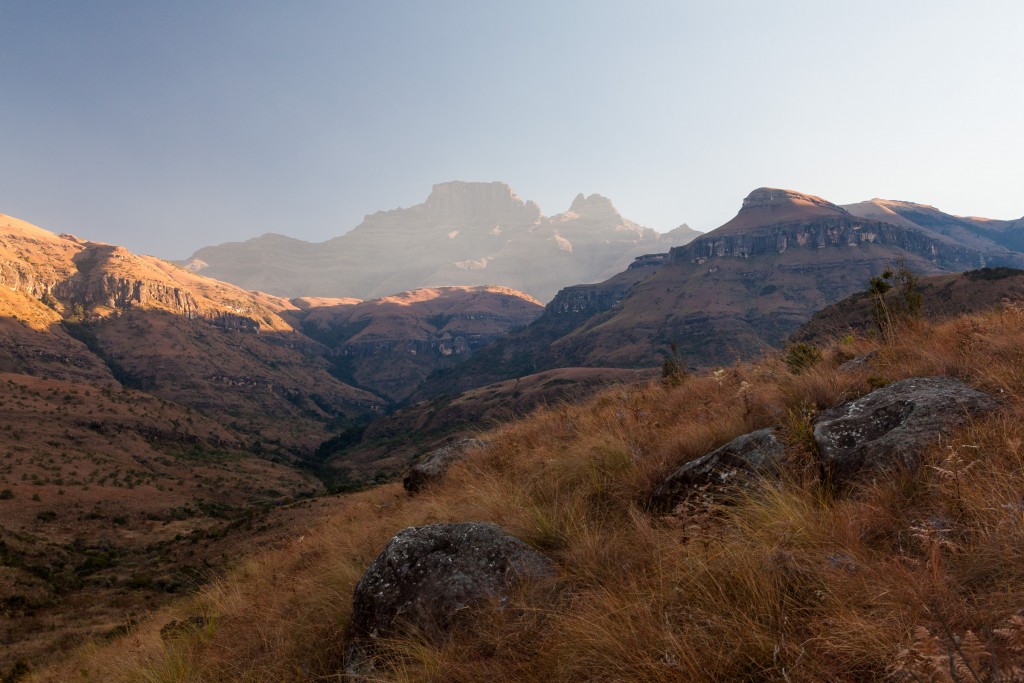 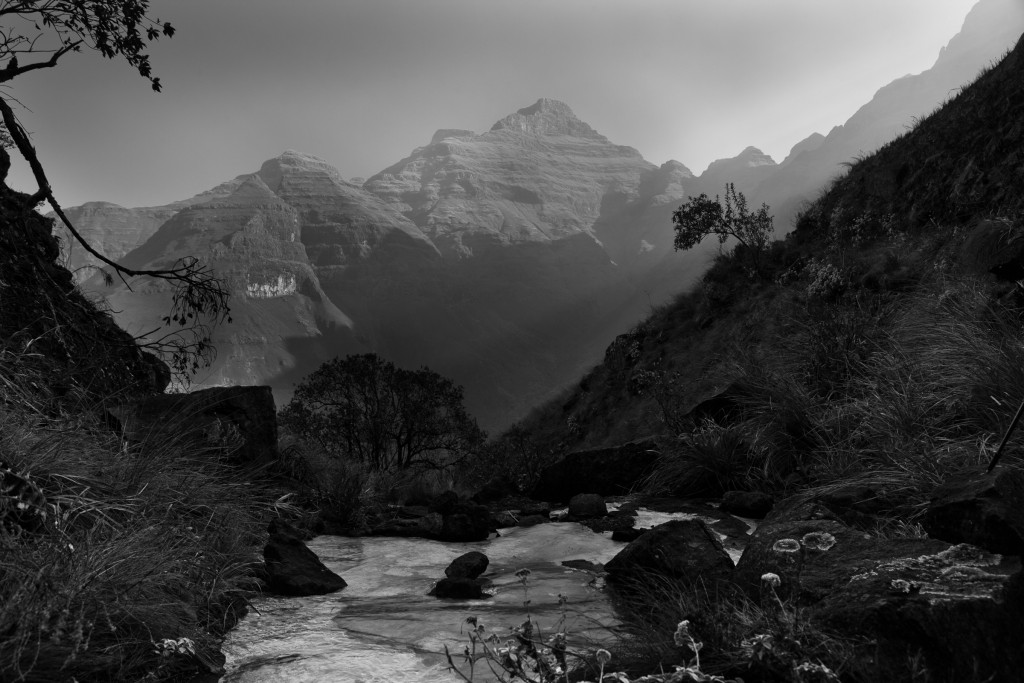 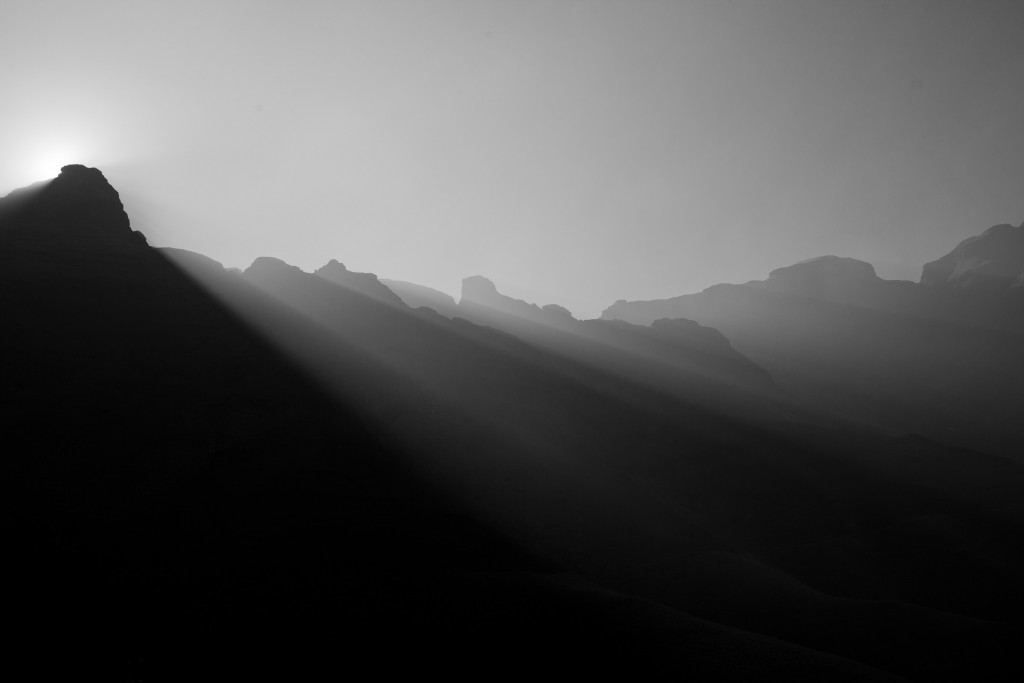 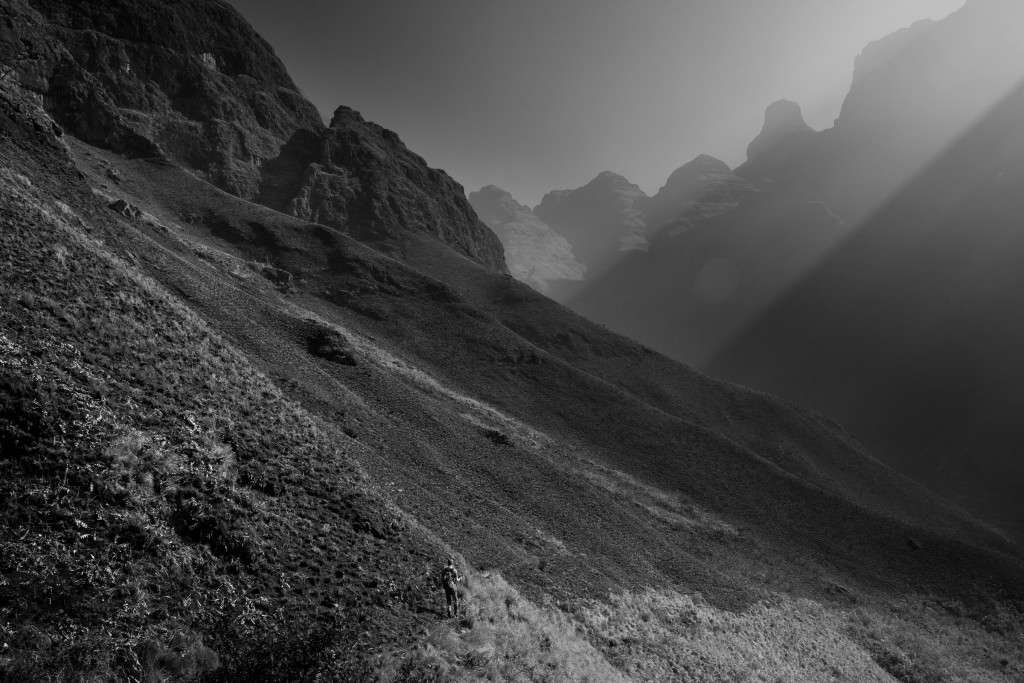 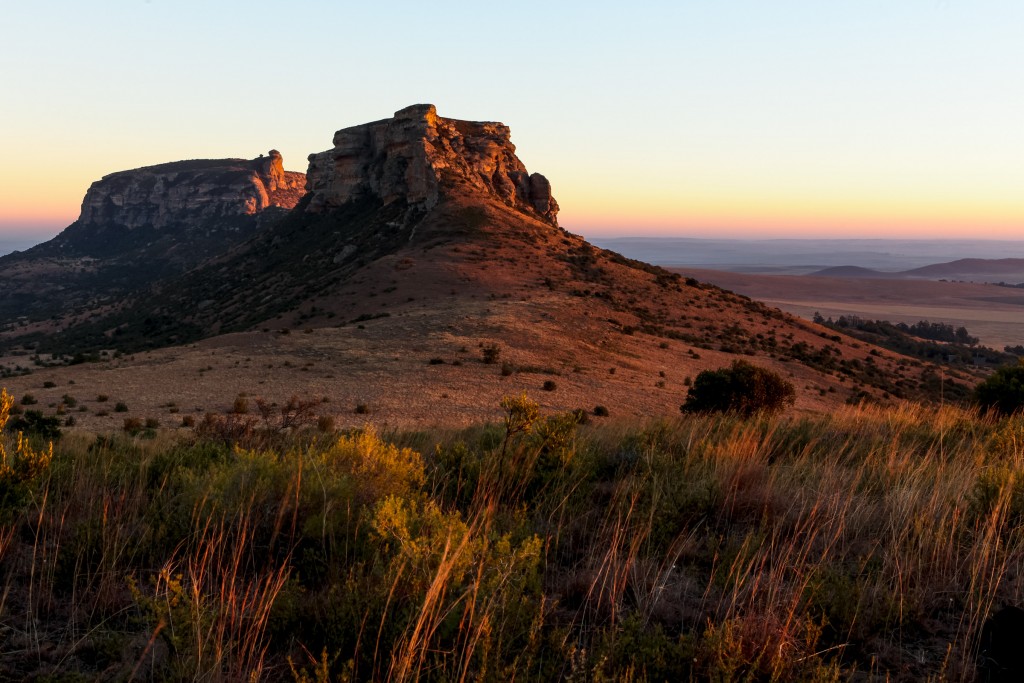 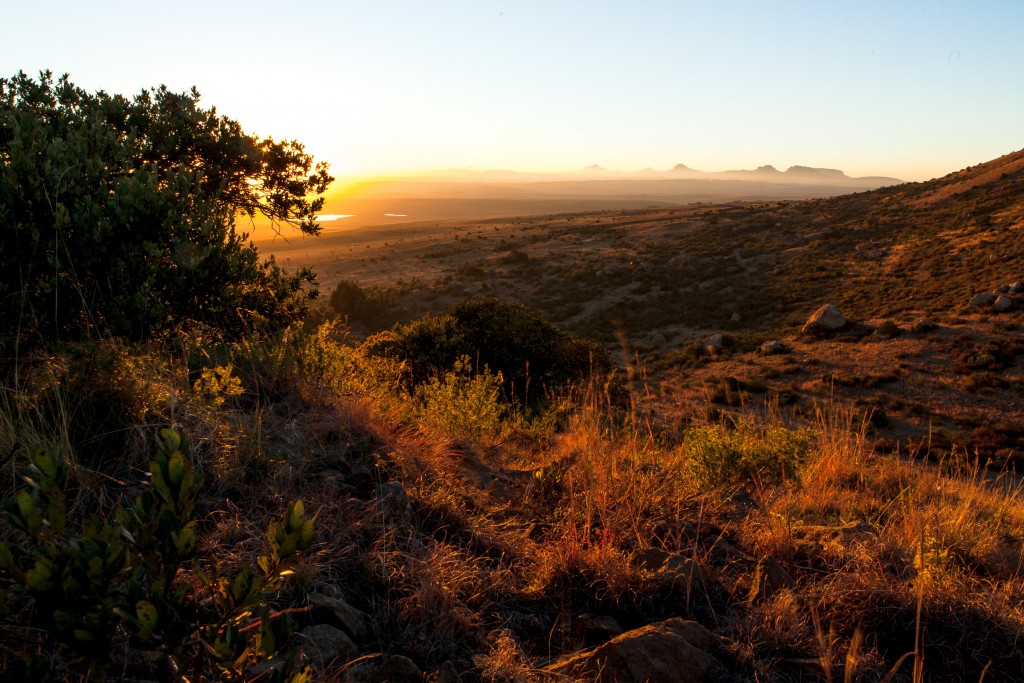 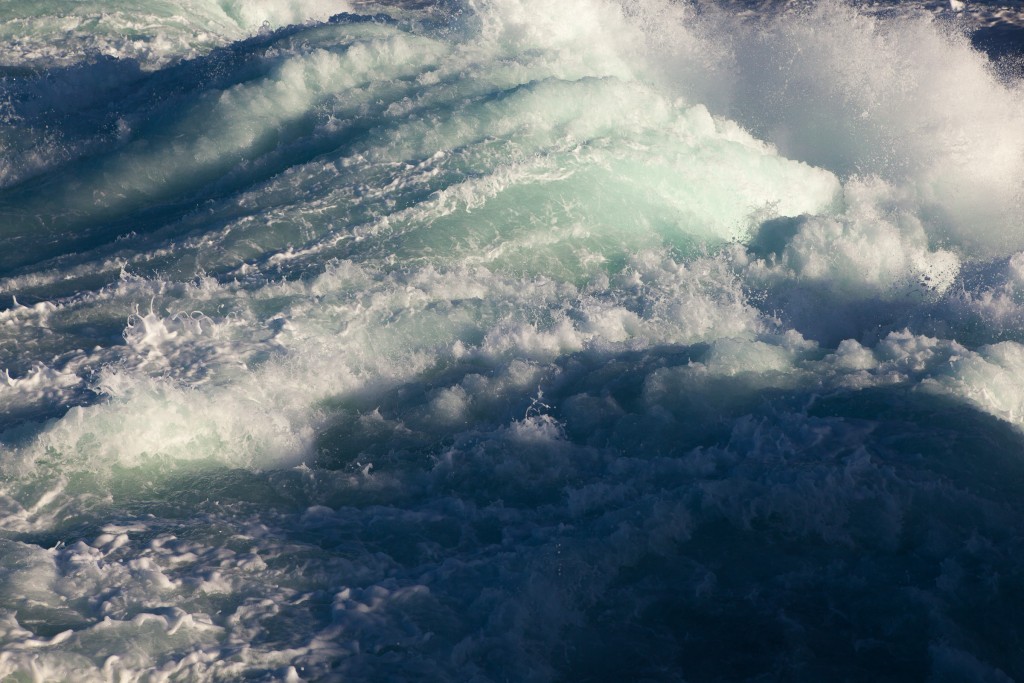 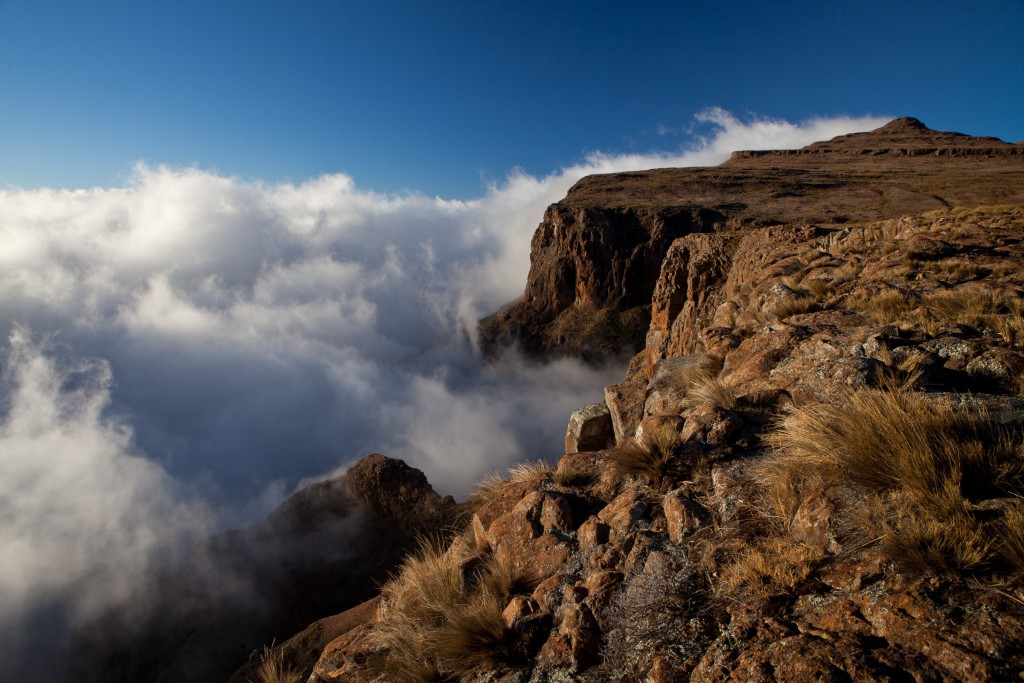 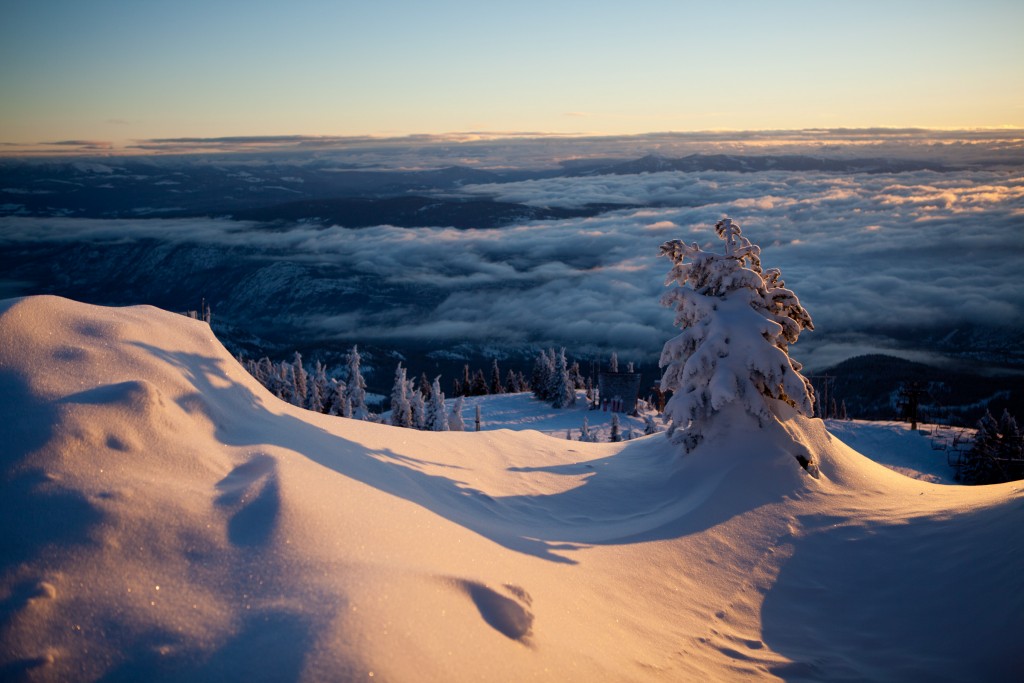